European Union Institutions tend to take the high ground when it comes to Gender Equality. The unveiling event for the new 100 and 200 Euro banknotes at the ECB showed how easy an opportunity to show equality is missed and traditional gender clichés are promoted – by the EU itself.

European Union Institutions, particularly the European Parliament and the European Commission, tend to take the high ground when it comes to Gender Equality. Demanding messages, especially to the private sector, are as frequent as their focus on the political agenda and stakeholder dialogue with low to no involvement of experts beyond the established sphere. European Union institutions are supposed to be role modelling EU policies and they have all the resources and the power to do. Against this backdrop, the recent unveiling ceremony of new banknotes at the ECB must be considered a disaster.

First hidden, then helpless: Two girls and the fall of the curtain

ECB Executive Board Member, Yves Mersch, took the floor on 17 September 2018 to introduce the latest and last EuroZone banknotes of the so-called Europa series. Europa is a women and he is not, but he should have been a women. The European Parliament had blocked his nomination for six months in 2012, requesting that a women should join ECB’s Executive Board. It might have been a good idea and she might have avoided the latest fail in EU gender equality.

Mersch presented for almost twenty minutes all the great achievements of EU money – politically, strategically and technically. Towards the end, he proceeded to the actual unveiling of a large display showing the new notes that had been all the time hidden behind a curtain. But not only the display was hidden: Two women were waiting behind to take off a piece of cloth, wrap it together and take it away while the Executive Board Member was first watching, then posing to the cameras.

“No different from a Motor Show”

Nobody knows if Mersch was involved in the design of the event. But it is very obvious that the ECB had not only missed a huge opportunity to subtly yet clearly communicate what gender equality could look like. It would have been no effort – other than thinking smartly – to cast one woman and one man for the job. Otherwise, there is also technology available today that can bring down or roll up a curtain to avoid putting persons in awkward situations. “The ECB has acted no different than firms presenting their products with female eye-catcher, for example at Motor Shows or many other business fairs”, The D&I Engineer, Michael Stuber, criticises. He questions, if such an obvious gender bias would have escaped a female Executive Board Member. “Given the harsh tone the EU often takes, this event should be considered a scandal”, Stuber added. Otherwise, he admits, it could be simply seen as an example for how ‘human’ bias is and that there are just so many everyday situations where it can happen.

To watch ECB’s video of the unveiling ceremony, follow this link 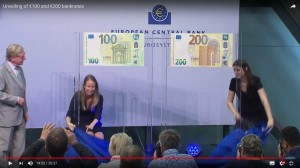